Back to Blog
Mature Buck StrategiesNovember 01, 2013

Huge rubs, large scrapes, and Giant deer tracks filled the 5-acre woodlotalong with zero deer. Night after night, hunts that should have "been," simply weren't. The sign was incredible, chewed-up deer trails littered the forest floor, and the anticipation of youth was always high!

I hunted within a section of land where that 5-acre parcel was located during the late 80's. As a young hunter it was difficult to withstand the temptation to hunt near the explosion of sign. I would often walk mile across the farm fields

to get to that small woodlot, wondering where those deer would actually come from to potentially travel by my stand. I remember sitting in my treestand wondering the same thing. Occasionally, a fawn buck would come wandering aimlessly through the woods, but most often my hunts ended without seeing a deer. I quickly learned the value of not spooking deer on the way to a stand site. "Access", "overall deer/human encounters", and "overuse" was so critical that I began to avoid some of my best stand sites,preferring to give them longer to improve by not using them.Eventually, I would use a stand when the timing was "perfect," meaning that all the considerations of time of year, wind direction, and time of day were optimum. 20 years ago I remember a past hunting partner using a preferred stand of mine on land he trespassed on, stating, "That is too good of a stand not to be used." Did I mention "past" hunting partner?

I have a concept I like to employ on every parcel of land I visit for a client, every portion of public land I hunt, and of course on my own private land hunts that I develop for myself. No matter how many stands you have scattered throughout the landscape, it is often highly advantageous to use what I call, "Perpendicular Access" to not only improve your access through "degrees of movement potential,' but to help you avoid stand overuse, as well as to lower your overall number of deer/human encounters.

A rock outcropping juts out high above and in front of the stand, a large and open horse pasture lies out behind the stand, and when you combine those great "pinch point" features with a hidden bedding area around the point to the right, and several hundred yards of cover extending up and to the left towards the food sourcesthe stage is set for a great hunt! The only thing left to do is to access the "Horse Pasture" stand appropriately, and that can easily be done with "Perpendicular Access." Of course, time of year, time of day, and the type of weather all plays a roll, but by paying attention to perpendicular access my SW WI lease partners and I have used that stand site to kill 6 mature bucks averaging 4 years of age and over 150" of antler growth.

As in most good stand locations, the deer movements typically travel back and forth in front of the stand, as deer move within or between the components of bedding and feeding. In thinking about my personal stand locations on public land in both MI and PA, or on my private land hunting sites in MI or WI, I can't think of a stand site I access that potentially spoils the back and forth movement of the site. In fact, I expect a minimum of a 180-degree window of unspoiled deer hunting potential movements at any stand site or I most likely will not hunt there; and that includes dozens of potential stand sites in the 3 states I currently hunt in.

In the Horse Pasture stand that I previously described, my lease partners and I enjoy roughly a 270-degree window of unspoiled deer movements. Topography and perpendicular access combine at the Horse Pasture stand to give us a huge area of deer movement that we can observe as the deer are funneled to within bow range on the upwind side of the stand location. I don't think it's any surprise that our best stand site on our WI lease is also one of the stand sites that features the highest degree of potential, unspoiled deer movements. As the degree potential increases due to perpendicular access...so do your odds for success.

It has long been written that your potential for success decreases each time you access a stand. I have experienced this every year and have planned accordingly - to the extent that over 85% of my mature buck harvests have been killed while using the stand for the first time for the season. Although your odds for success decrease each time you access a stand, that doesn't mean you can't greatly diminish the phenomenon. When you access a stand site that is perpendicular to deer movements, you rarely place yourself in a position to spook game, especially if care is taken to minimize your "Scent, Site and Sound" while entering and departing your stand.

I strongly advocate hunting thin lines of movement whether they be travel corridors, food sources, downwind brush funnels adjacent to heavy bedding cover, etc. When you combine the concept of thin lines of movement with a perpendicular access in whichyour human presence has been greatly reduced, your negative effect on the stand location overall is kept to a bare minimum.

In my experience there is always a diminishing return on stand usage, meaning, your first sit is at 100% potential, the 2nd less than the first, 3rd less than the 2nd, etc. For the sake of discussion, let's say that poor access might reduce your 2nd sit to a 60% potential, the 3rd sit to a 40% potential, and so on. Now, consider that you take every measure of removing your trace of "Scent, Site, and Sound" from your human intrusion into the woods. Secondly, consider that you have taken every effort to approach with a perpendicular, non-invasive access where you are not exposing yourself to the expected deer movements surrounding the stand site. Sometimes, "not exposing" yourself to the deer movements, may mean the easiest way to access a stand is not the best way. I can honestly say that my typical access to an average stand location in PA, OH, MI and WI, on both public and private lands, takes over hour, 1-way, to reach.

The way I personally like to hunt, as well as to make recommendations for clients to hunt, is that the potential of success for multiple sits in the same stand is much greater if measures are taken to reduce the site, sound and scent of the hunter's approach, a perpendicular access is taken, and the best route to the stand location (not necessarily the easiest route) is taken. On small private parcels or public land sites where stand locations are potentially fewer, a perpendicular access will help you get the most out of your stand locations by avoiding pre-mature stand burn-out. Can you afford not too? It's not uncommon for quality sits to extend into the 4thor 5thsit if you are doing your best to access the property without the deer even being aware it's hunting season.

Deer are amazing creatures! To me, watching a deer in its natural setting is incredibly relaxing. When a deer feeds, sleeps, travels, and communicates with other deer, I often view it like it's some type of living "puzzle." However, even with my personal obsession for most things "deer,"the one thing I avoid at all costs is to actually SEE or SPOOK a deer on the way into my stand sites. I call these "deer/human" encounters, and without getting into too much description, the more encounters you have, the less effective your hunting efforts will ever be. In fact, it's a downward spiral of frequently walking into the woods and telling the deer, "This is when I'm coming, this is where I'm going, this is when I'm leaving, and this is when it's safe for you to come out of hiding." Personally, I want to observe deer where I expect them to be, leave them alone, and make them feel safe until it's the right time, with the right deer, to kill them.

Think of moving about your property like a cougar. For many parcels a cougar could easily drift through a parcel without the deer knowing a predator is nearby. We need to do the same, and although we can't walk as silently as a whisper across dried leaves like a giant cat, we CAN limit how often we potentially expose ourselves to the local deer herd. The way we limit these encounters is by avoiding bedding areas, food sources, and frequent deer hang-outs as we travel about our parcel. But during the months of hunting season, you can take it one step further and attempt to substantially decrease the chances of an encounter at one of the most vulnerable points, your stand location.This is really not that difficult, because all that you have to do is to make sure you are accessing your stand perpendicularly to the travel patterns of the deer that use your parcel, and that you are keeping the deer patterns on the opposite side of the stand from which you enter and exit. Think of spooking a deer where you hunt as the "tip of the iceberg," meaning the one deer you spooked is a problem that is often reflective of an even bigger problemthe several deer that you didn't even know you spooked because they were a few hundred yards away by the time you arrived at your stand.

Looking back to those learning experiences of the late 80's, I could have often used a perpendicular approach to set up on the downwind side of deer movements and go in for the kill. The problem was that my random movements spooked deer sometimes mile away before I even reached the woodlot, because I often had to walk right alongside a bedding or feeding area before reaching my stand. Seeing a few deer the first sit turned into zero deer pretty quickly, and I was forced to find other stand locations to try and shoot a deer from. I would venture a guess that my window of degree potential of unspoiled deer movement from that stand location was zero, compared to my SW WI "Horse Pasture" stand of roughly 270 degrees, and the results speak for themselves. Although you will never have the senses and dead-silent movements of a big cat, a perpendicular access is just one more way that you as a hunter can move about your parcel as a more efficient predator.

This is chapter 19 of my book, "Whitetail Success by Design" which can be purchased here.. I have really enjoyed sharing these concepts with everyone, and I hope that you will enjoy a glimpse into what the book has to offer! The book is not specific to private or public land, with a little bit for everyone, detailing a proven approach to "Designing Your Next Hunt of a Lifetime". 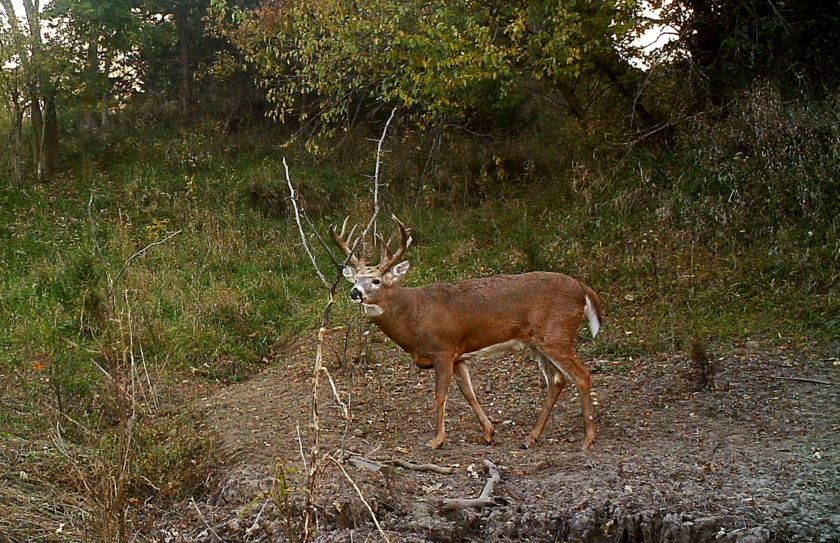 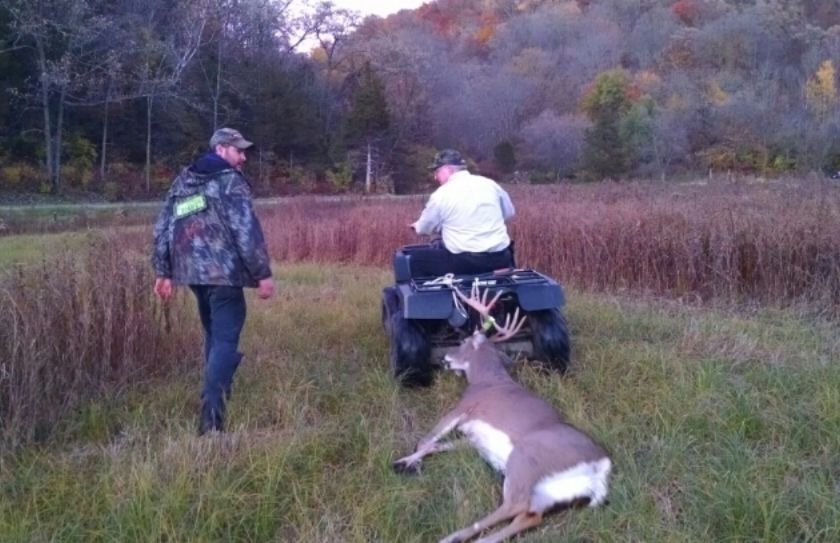