Back to Blog
Mature Buck StrategiesSeptember 24, 2014

So, are you an October or November hunter? Each of the sacred hunting months of Fall hold a special place in hunter's hearts and minds anywhere a whitetail roams. October could be described as a relaxing month, while spending time easing into the season during all of Autumn's beauty. November on the otherhand, could be more accurately described as a month of harsh extremes, including the intensity of the annual rut, gun season openers, bitter weather fronts and deer movement shut-downs. Personally, I appreciate both months, and all of the variety that they offer!

That variety of weather, beauty and deer movements is also reflected by 2 distinctly different periods of time to hunt and target mature bucks, with often extremely contrasting hunting styles needed to be successful. Does your favorite whitetail month match your habitat needs and personal hunting style? "October Vs. November mature buck hunting methods"...the comparison is on! Whichever month comes out on top will have a direct reflection of exactly when and how to target your next monster buck.

The Pre-rut takes place during the last 10 days of October, when temperatures are driven low and the barametric pressure is on the rise. However if you lack quality, November habitat you may notice a complete lack of rutting activity. This can be extremely frustrating, especially when your game cams were full of early October snapshots of giants. It's important to be able to recognize exactly which type of habitat you are about to hunt, because the absence or abundance of game within the lands you hunt is determined by it. There are few mysteries in the deer woods, in particular where a mature buck calls home during the season; he leaves a lot of sign! Is a mature buck in the woods? If there is very little sign, no game cam pictures and you lack the habitat needed to attract a mature buck-probably not.

While September begs for the label as the last, lazy month of Summer boredom in the whitetail woods, November eventually commands the need for a full ensemble of cold weather food and cover. And then, there is October! October is a month of change, featuring the need for late Summer food sources and the colored canopy of mature hardwoods, complete with an eventual transition to thick security cover and cool season food sources. October is the month that can give you the illusion that "everything is just fine" during the first week or two, when in fact you are quickly headed for a late October exodus of mature buck sightings as each day passes. What about the "October Lull"? Do mature bucks really dissappear and only move under the cover of midnight darkness? I don't believe so, instead, I have experienced that they just eventually gravitate towards their November food and cover needs.

Velvet covered Summer monarchs crave the cool, shaded and open understory of mature hardwood forests, and then eventually seek-out the thickest combination of antler grabbing thickets of hardwood regeneration, shrubs, conifers and grasses that they can find. When you combine the onslaught of hunter intrusions with the remote security cover needs of November whitetails, the total number of available quality acres of cover is reduced by the day. What started out as an overabundance of cover during the beginning of October, shrinks to just a fraction of the available preferred daytime holding cover by the end of November.

Just as fast as the amount of quality bedding cover is shrinking, so is the combination of quality forage! October is the month of harvest, with the majority of both mast and agricultural crops completely removed from the daily feeding patterns of the local deer herd. However, there is no reason to be dismayed at the reduction of both food and cover that the month of October leaves in it's wake! As quality habitat is deminished in the form of both food and cover, the value of the small pockets of remaining secure cover and forage is greatly increased. If you own land you use a lot of hard work (and sometimes money) to create one of the best deer sanctuaries in the neighborhood, and if you hunt public land you can put in your hiking-shoe time in, to find those same, hidden nuggets that fit the needs of a November herd.

During the last 10 days of October you can literally experience the best hunting of the entire season. But will you? The problem with the Pre-rut is that while a mature buck may move all morning long, he will tyically travel within a very small area that encompasses 20 acres or less. If he chooses to spend his time on your neighbor's land within his preferred cool season habitat, you may not even see a scrape, let alone a buck. Knowing which type of habitat that you hunt, will also tell you when to hunt.

Capturing giant bucks through the lens of your game camera not only gets the heart pounding, but it also can be a lot of fun! But more than just "fun", it's a chance to scout the oldest of bucks in the neighborhood. If you follow no advice that you read here in this article, I beg you to follow this: If you are getting pictures of mature bucks during, or close to, shooting hours-the time to hunt them is NOW, not later! Regardless of if you are capturing mature bucks within an early season habitat pattern that will change quickly, or your are setting your sights on a buck that has chosen the land that you hunt as his "core" honey hole for the hunting season, it just doesn't pay to wait to go in for the kill. Early season habitats can change in a moment, and a resident buck can leave to search for does during the middle of the rut, and both will expose themselves to November pressure on neighboring lands. For guys who are on their Fall habitat and food source game, October can be by far the best chance to harvest a mature buck. Often you can experience quality opportunities the entire month, before the extremies of November begin to kick into full gear!

November is the perfect time to sit back, choose a good funnel in mature buck territory, and see what the weather, rut and other hunters throw your way. If you carry all of the ingredients of quality cold season habitat then you just may end up collecting bucks as the month progresses. Or, if you lack quality November habitat, it's a great time to sit back and wait for a cruising mid-rut monster! While October can be considered the month of surgical, precision strike opportunities, November could be more defined as the shotgun approach. I personally value the precision of October hunts on known bucks living in their defined core habitats, but I also sometimes need to rely on the randomness of November for various reasons:

1. Lack of planning. Sometimes I just I haven't had time to narrow down a mature buck on the land I will be hunting, so my scouting time was devoted towards finding rut-cruising funnels and gun season escape routes.
2. Large expanses of public land. Public land hunting can include low quality food sources spread randomly across large regions, with a bounty of hidden and remote daytime bedding areas. It can be difficult to define exactly where a buck is bedding and where he is feeding because much of the land is close to the same in value. However, when it comes to the middle of the rut, I love to find funnels and large habitat changes that serve to move deer across great distances while searching for does. When I hunt in OH on public land this year, I will almost exclusively hunt in November, where daytime mature buck movements can equal miles of movement per day.
3. Poor cold season habitat or food source. Sometimes the land that you hunt simply does not offer...or can not offer, quality cool season food sources. Sometimes the food sources change by the season as well. If you lack quality hunting season food or cover, November can be the one time where you can get a great chance at a mature buck as they begin to cruise greater distances for receptive does-even through poor quality habitats.

Here is an important question for you to ponder:

1. Do you have the food, cover and buck sign to be able to take advantage of a precision, October hunt?

If not, it may serve you well to wait for November and practice a shotgun approach, while trying to take advantage of the long-distance wonderings of Peak-rut to Post-rut monsters. However, if you can recognize the sign of high quality mature bucks around shooting hours in October, learn to plan for and enjoy a precision approach. This year I am certainly in a transition of sorts! Of course I will be taking advantage of the shotgun approach in November on public land in OH, but with a new lease in WI-I just don't know yet. However, I will let the game cam pics and sign tell me which month I personally need to gear my efforts towards this year. If I have to wait until November this year for quality mature buck opportunities, I will try to make some habitat changes to create October opportunities for next year. 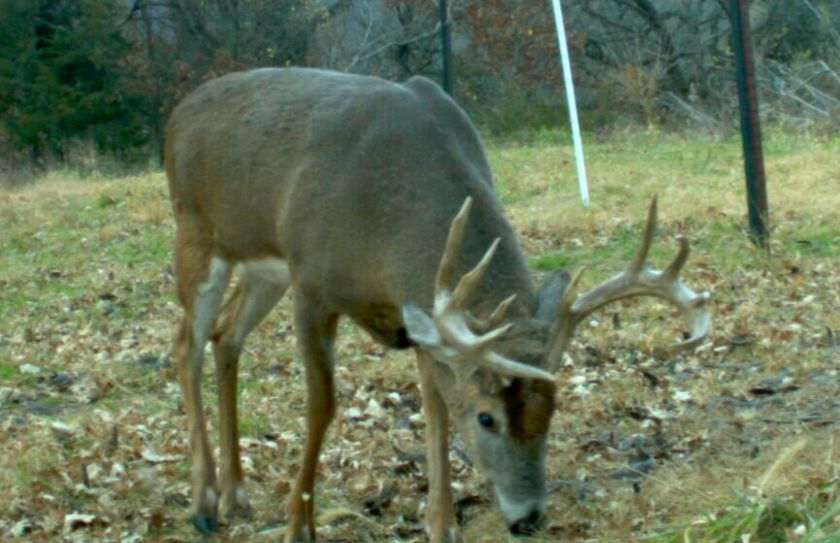 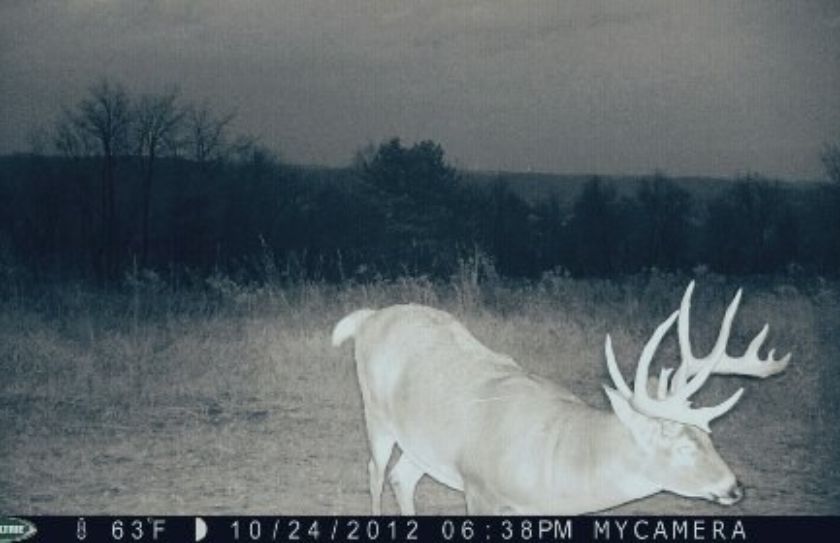 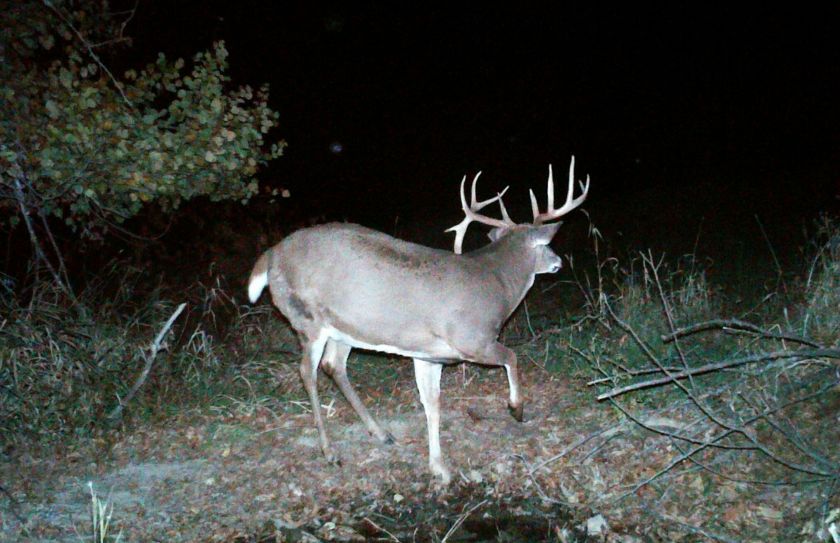