Back to Blog
Mature Buck StrategiesDecember 27, 2015

Late season deer hunting efforts often include a mixed bag of opportunities for mature bucks. Whether you are hunting with a bow, muzzleloader, shotgun or rifle, your rate of success can be extremely high if you make sure that you focus on 3 key ingredients, including: Hunting pressure, weather and food.

Can you find unpressured lands with quality food?

As the hunting season progresses, the amount of quality cool season food offerings drastically decreases. But even less than quality food options, are the number of parcels that have not been significantly impacted by the negative effects of excessive hunting pressure. Deer, in particular mature bucks, gravitate heavily to the widely scattered pockets of low levels of hunting pressure, combined with high levels of late season deer specific forages. Although cover is important, even low quality cover can yield impressive late season pockets of quality deer herds when great food and a lack of hunting pressure is applied.

Great deer management begins and ends with the quality level of your hunting efforts. There is absolutely no amount of quality habitat improvement that you can make, that can overcome poor hunting practices. In fact, when you improve the habitat but your hunting efforts are not up to par, the negative effects of hunting pressure is only magnified, and exposed to more deer. As the months progress into the late season, deer will increasingly respond unfavorably to the cumulative effects of hunting pressure, with the peak of those effects taking place during the late season. This can be both a blessing and a curse (most often a curse), because if you are able to climb into a treestand on a chunk of ground that has somehow avoided hunting pressure AND offers a high quality food source; you will be in for a substantial deer hunting treat! However, if the deer that you hunt have been consistently educated to hunter movements, you may want to focus on football.

*During late season deer hunting efforts, in particular for mature bucks, unpressured food sources rule the landscape regardless of the weapon that you choose to take to the field. To make sure that your mature buck hunting tactics are on pace with your habitat and herd management efforts, make sure to check out my latest book, "Mature Buck Success by Design".

How is the weather?

Unlike the morning wanderings of rutting bucks, the entire deer herd is slammed into energy conservation mode, during late season deer hunts. This means that when conditions are warm and favorable, deer can often be found browsing aggressively. This also means that during the coldest portions of the day (often at daybreak), a mature buck will most likely be bedded in the portion of his bedding habitat that allows him to escape both energy robbing winds and bitter temperatures. There are some key daily time slots that can't be missed, depending on the weather:

1. During below average temperature days, great opportunities can often be found between the hours of mid morning, to mid afternoon, as deer prefer to forage during the warmest time of the day, to efficiently conserve energy and replenish it, at the same time.
2. When a major storm is in the forecast for the next 24-36 hours, make sure to hit the woods! From mid morning to darkness, deer will be on the move while stocking up on the energy reserves that will help them weather the storm.
3. Are the conditions, boring, stable and predictable? Then hunting unpressured food sourced during the afternoon hours can not be missed. During this time of the hunting season you can typically set your watch to the incredible defined afternoon feeding patterns of the entire deer herd. Although a mature buck is typically the last deer to enter the field, he will not be too far behind the doe herd if you have not applied too much hunting pressure to the land.
4. If the snow is wet, sticky and fresh, late season deer movements can be outstanding! If the snow is powdery and light, you may want to wait until warming suns improve the temperatures, as well as the deer movements.
5. When the conditions are frigid, bitter and literally life threatening, it pays to wait. Since hunting the Northern Midwest since the 80s, I have had the opportunity to climb into a tree stand during numerous sub zero daytime high temperature sits. Although there is always a possibility of a brief period of mid day movement, deer sightings can be extremely hard to come by. By hunting the 24-36 hours just prior to the event, or within the 1 to 3 days that follow, during an eventual warmup, you can find deer in their ravenous modes! Keep in mind deer know when its time to conserve their energy reserves, and when it is time to fill their tanks, so don't miss the time slots that create binge opportunities of aggressive feeding movements.

How should you hunt?

Very carefully! Although the doe herd can be bumped around significantly before eventually exiting to quieter pastures, a mature buck is often the first to leave. Doe family groups have tighter home ranges, can take higher levels of hunting pressure, and can often be very misleading in their daily movements because they are literally, the last portion of the deer herd to leave their preferred habitat. It takes very little to push a mature buck to distant lands, and even if he still chooses to feed within a quality late season food source, it may not be until the middle of the night, and only after he has traveled a great distance to get there.

Are mature bucks truly nocturnal during the late season? Not likely, instead, they are just extremely reactive to hunting pressure, and are not afraid to leave the rest of the herd to find peace and quiet.

*If you aren't warm, it will be hard to find success! For tips on how to brave the elements, check out "Staying Warm in a Late Season Deer Stand".

A premium should always be placed on hunting afternoon movements to food, or on the food source itself. However, the entire line of movement, from bedding to feeding, should be protected as much as you possibly can. Here are some ways to make sure that you practice spook-free late season deer hunting opportunities:

1. You should often avoid hunting morning bedding areas, and most likely spooking a mature buck that is already bedding down in the coldest portion of the day.
2. During mid morning hunts I personally like to make sure that I access behind a wall of conifer, heavy habitat screenings or better yet a massive ridge system, to barely access the outer edge of a quality mid-morning feedng area.
3. Make sure to avoid the tempatation of "one and done" afternoon food source sits. By protecting the food source at all costs, you can live to hunt another day, and you will not prematurely spook younger bucks that you were hoping to protect, to neighbors that may not share your same buck age structure views.
4. Quiet is king! If it snaps, rips, tings, tangs or crackles, try to leave it at home. Whitetails are typically living in the high stress world of survival mode, after months of hunting pressure. What a mature buck may tolerate during an early season hunt, will most likely not be tolerated a dozen weeks later, and that includes not only the sound of a hunter, but the scent and site of a hunter as well.

Can you find unpressured lands with quality food?

Do you still have a tag? Then try not to miss out on this once in a deer season opportunity to take advantage of some of the most predictable deer movements that can be witnessed, during the entire year, let alone the entire season. 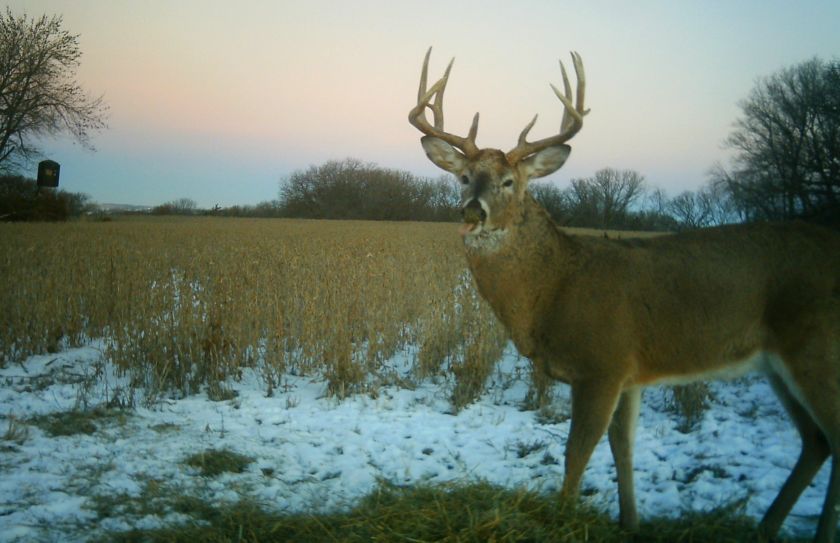 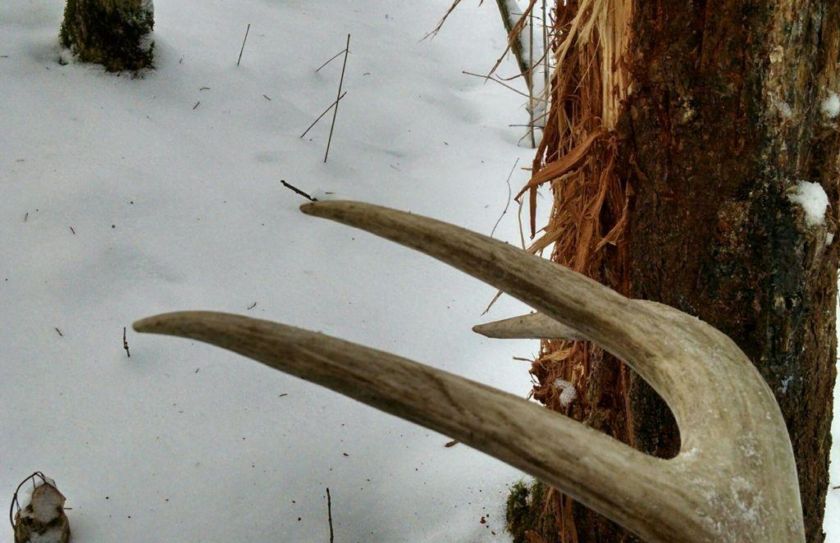 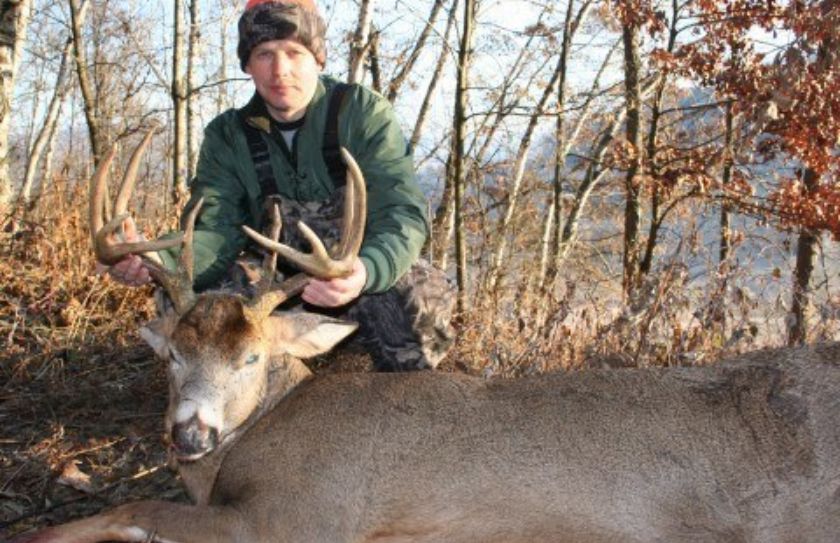