The Power of Winter Rye for Whitetail Food Plots

When we purchased our Upper Peninsula of MI land in 1999, I promptly coordinated a visit with the local conservation forester. Have you folks ever done the same? I thought it was a great idea! My goals were to find out how to improve the snowshoe hare, deer and grouse habitat and I was hoping to get a detailed look into doing so as quickly as possible. I was also really excited! Of course, this was a very big purchase for us but even more so it was on land that was connected to our home. I just really wanted to "get it right" during the upcoming visit.

The visit came, and as we walked-my excitement was steadily squashed. I found out that my soils were too poor for food plots, I should be planting conifers which was a whole lot more of the same, and that my favorite area of diverse whitetail habitat would make a great duck pond. During the entire visit every piece of information that I gleaned from the forester was from extremely professional, experienced and schooled advice. In the end though that advice just wasn't for me, and it's a good thing that I am extremely stubborn. We will leave the thoughts about hare and grouse to another article someday if my "whitetail focus" ever fades...but for now, let's talk whitetails!

I had started planting food plots in 1996 and I was thirsty for as much information as possible. Although I was told I should be planting red pines for timber production instead of forages for deer, my next stop was one of the most important food-plotting visits that I have ever made. I met with Alger County Extension Director and U.P. Field Crops Educator, Jim Isleib. And yes...his titles match his incredible wealth of knowledge. His thoughts carried such a complex and experienced background, but yet were so incredibly simple: Match the appropriate seed to the soil conditions, plant those seeds at the appropriate time to take advantage of moisture, pH correction and fertilization, and I most definitely could grow food plots on my land. I felt almost relieved at the prospect. His next bit of insight? MSU agricultural studies showed that Winter Rye was the most pH, soil, and cold-weather tolerant seed variety that I could plant. Of course he highly recommended rye for my soil conditions, and now 15 years later I have used it every year no matter if I was planting plots within the high quality ag soils of MN and WI or the low ph, sand loams of the UP of MI. Winter rye also typically makes up at least a portion of my planting recommendations for the majority of my clients in virtually every state I visit. Winter Rye has become so much more than just a quality food plot forage for poor soils, and I am excited to discuss the extreme power of Winter Rye for Whitetails:

Do you have low pH soils, poor fertility rates and cold weather fast approaching? Winter rye is for you! Around the year of 2001, I was in a rush to create a 1/2 acre food plot, fertilize, lime and broadcast rye. An initial soil test revealed a pH level below 5 and after removing the conifer, the exposed soil could be labeled "extremely poor" at best. No problem! I applied 200#s per acre of rye (and a little more later), lime by hand, fertilizer and a melting late October 1st snowfall germinated the plot into a respectful field of green within 10 days. The results could not have been accomplished with any other food plot forage.

During the early years of the 2000s, I definitely caught the but of the "cold hardy oat phase"! During the first year I planted it I was greatly pleased with the initial results, and then a little dissappointed when it was brown by early December. I then expiremented with the % of the oats to include 30% Winter Rye, 50% Winter Rye and finally 70-80% rye while adding additional broadcastings of rye to thicken the stand. Why? Because I found that the value of offering green and foragable rye, all the way through to the point of spring green-up, was critical to the local deer herd. I still plant oats today, and I appreciate the "other cereal grain" for it's value as a quick start light forage for my Food Plot Layering Method, or as a small portion of a 1-time planting teamed with brassicas, peas and other forages. However, Winter Rye is king in book, for not only offering a sure-fire late season green food source, but for providing valuable forage into early spring at a time when clover, alfalfa and other greens are weeks away from their annual warm-season wake up calls.

Have you ever grown a great food plot of brassica, soybeans or peas only to see it eaten to the dirt by Mid-September? I sure have, and when it happened over 10 years ago I was pretty bummed...until I thought of using Winter Rye to potentially fix the problem. During early September I could see that my brassica crop was being foraged on far too hard to withstand the grazing pressure until the October 1st bowseason opener. 200#s of broadasted rye and 2 weeks later...problem solved! An interesting thing occured as well: As the deer quickly turned their attention to the succulent shoots of young rye, the brassicas actually developed new growth. Whitetails absolutely love young cereal grains, and rye is no exception. The plot quickly became a favorite to the local deer herd, as well as one of my first layered food plots! The ease of simply broadcasting rye on exposed soil to experience extremely high germination rates (even in the bed of my pick-up) has become a staple to many of my current food plotting efforts...as well as a quick-salvage to correct poorly growing food plots for both myself, my clients....and maybe YOU!

To increase volume, just plant more seed-right? Although that could possibly sound good on paper, I believe the answer is "No". Whatever forage, or combination of forage that you plant just simply grows at a similar height, matures at the same time, and has a limited potential of volume as plants are competing for the same space. Instead, try layering your plantings! By planting early, quick growth high attractants such as oats or peas you can set yourself up for immediate forage, with reinforcements soon on the way. In very simple terms, picture your first forage approaching 8" while a 2nd layer of Winter Rye is 2" tall. Then, as the first layer is topping out at 10-12" and being heavily foraged on, the 2nd layer is close to 6", and the 3rd layer of rye is 2" and young. Deer feed typically from the top down and as the first planting is being diminished, the bottom layers are rising up to meet the browse line.

I first started purposely practicing this method for myself, and then recommending it to my clients to aid in volume and overall length of attraction within staggered plantings of rye on poor soils. The practice involves planting rye 2-3 weeks earlier in smaller amounts (50-75#s per acre), and then again at the typical planting date for your area, and then again 2-3 wees after the "typical" date. 3 plantings-3 stages of growth-3 levels of palatibility, volume and attraction! Now, I greatly enjoy using layers of oats and peas, oats and radishes...and any combination of seeds to produce the layering effect whether the food plot is being planted on great soils or poor. Of course there is probably no other forage that can be used as effectively and as predictably, as Winter Rye.

At this point, I have a confession to make: Winter rye is not my favorite forage to plant for deer. Instead, depending on the location I greatly enjoy the more "glamour crops" of brassica blends, soybeans, corn, peas, etc. However, the true workhorse compared to any other forage variety to me, is Winter Rye. It's overall versatility with poor soils, poor conditions and an extreme variety of growing circumstances places rye in a league of it's own. And it's probably why it grows in the back of my truck each and every year.... 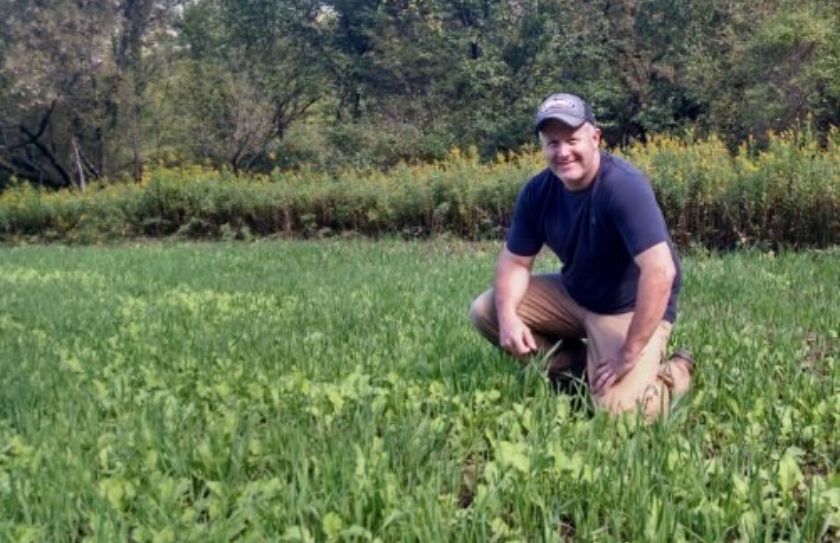 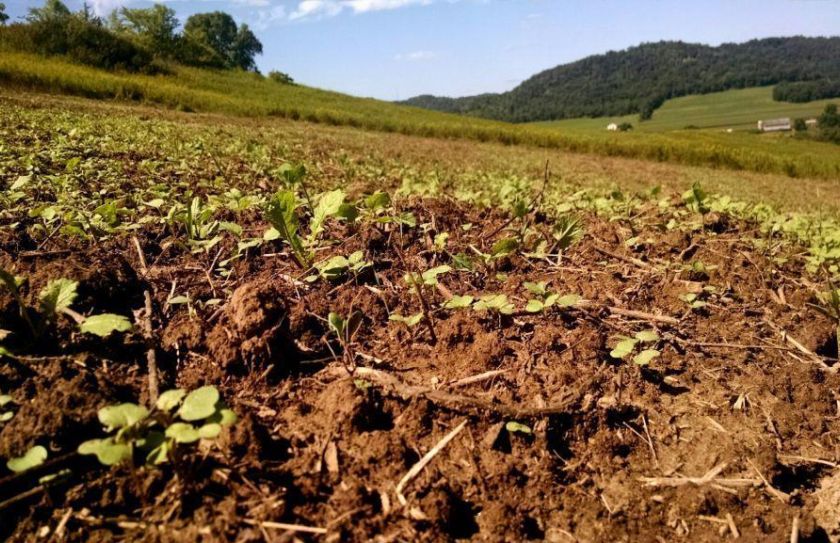 How To Recover From Food Plot Failures 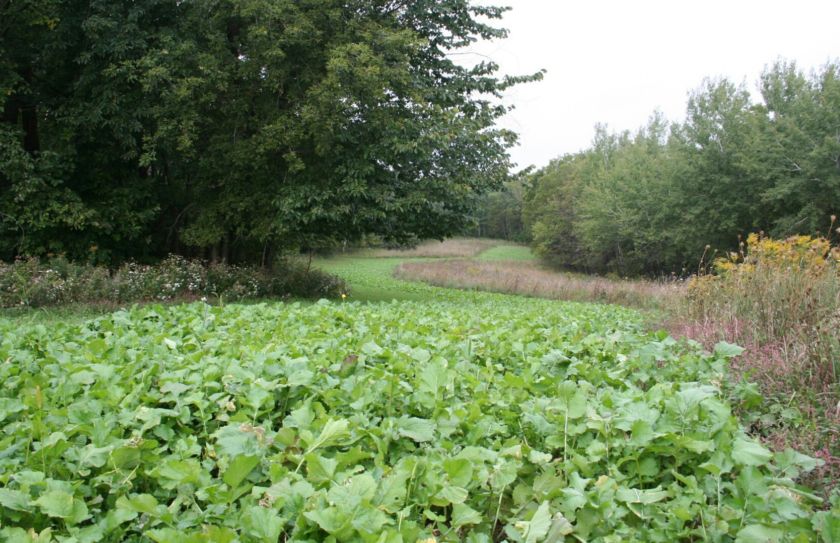 Easy No Till Food Plot Methods