Back to Blog
Habitat and Herd ImprovementJanuary 26, 2017

How many acres of improvement are enough? The most amount of acres that you can improve, that each link together to create highly defined daily movements from daytime bedding to afternoon food sources, is the right amount. However, there is one major catch! You still have to be able to move about your land like a predator during the season, with a very low level of risk that you will actually spook deer. That means that you need to leave enough acres of non-improved portions of the habitat to be able to access through while hunting, and at the same time to blow your scent into while on your treestands. If you improve too many acres, you run the risk of placing improvements in the direct line of your access or treestand use. If you improve too little, you may build habitat improvements that create a low level of efficiency of your total acreage.

If a food plot, travel corridor, waterhole or bedding area pushed deer into your hunting access or to your neighbor's hunting land, then it is probably not a good idea to create it. Any basic habitat improvement starts with food. Food defines where deer travel to in the afternoon every single day of the season, and food also defines where doe family groups bed. Next, the adjacent cover creates oppportunity for defined movements from doe family groups to food, followed by buck movements to those food sources. A highly effecient, dependable daily movement features adequate buck bedding areas furthest from a major afternoon food source, then doe bedding areas and then the food source itself, preferrably all on your own land.

By creating efficient and highly defined lines of movement, often combined with waterholes and mock scrapes, you can then create an effective hunting strategy that includes morning stand locations that relate to bedding areas and afternoon stand locations that relate more to food. They key? The entire movement is defined enough to leave portions of your habitat that are NOT improved, to allow you as a hunter to move about the land undetected. The more acres that you have improved on your parcel, the greater the risk that you will increasingly spook more deer.

Besides being whitetail habitat improvements, what do food plots, travel corridors, waterholes, mock scrapes, grass plantings and hinge cut bedding areas have in common? They are all portions of the habitat that should be considered part of your deer sanctuary. They are also all portions of your habitat that add together to create the percentage of efficiency that your land has dedicated to "all deer, all the time". No parcel can carry a 100% level of effeciency because that would mean you could never access the land as a hunter. Roads, houses, lakes, rivers and neighboring considerations are all examples of features that can ultimately cut into your land's level of efficiency. Also, as parcel sizes decrease, the amount of acres that you can dedicate to "all deer all the time" decrease as a % as well, because of the amount of acres still needed to access your land.

Some common percentages of acres that I create for my clients are roughly 55-65% efficient for 40 acres or less, 65-75% efficency levels for parcels closer to 80 acres in size, and at least 80% efficiency for parcels 100 acres in size or greater. Rarely can any parcel of land be more than 85% efficient, and 60-70% is most common.

The 42 acre parcel above, features a level of efficiency of roughly 70%. Food plots (green), travel corridors (yellow/orange), Switchgrass (yellow), apple orchard corridor (red) diversity improvements (brown), bedding pockets (orange) and the 1 lone watherhole (blue), are all included within the parcel's core sanctuary area. That still leaves quite a few acres to travel through to access stand locations (red) as well as enough land to blow a hunter's scent into while on stand.

Why shouldn't you improve every acre on your land? Because you can't possibly access your land without the strong risk of spooking deer every time your hunt. A great whitetail habitat design is far from improving every acre on your land, but instead improving the acres where you need them most, to define deer movement. Once daily deer movements have been defined, you can then define how your hunt your land. 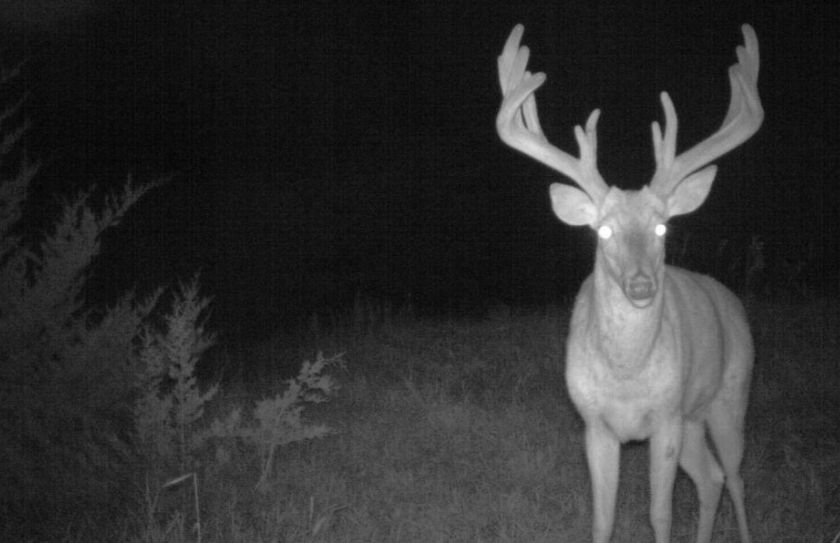 Strategies for Creating a Deer Sanctuary