Back to Blog
Habitat and Herd ImprovementFebruary 23, 2016

Winter whitetail scouting efforts can reveal a pile of sign, but that sign can also be very misleading, in terms of your next hunting season. Are you finding a few sheds, several old scrapes and a few dozen rubs? Not all winter sign discoveries are created equal. Even the above picture of an obvious buck bed and shed antlers, can be misleading if you do not understand the rules of scouting whitetails during the Winter months.

*Would you like to learn how to turn your winter whitetail scouting activities, into a high level of hunting season success? Then make sure to check out my recently completely trilogy of whitetail strategy books, including my latest book, "Mature Buck Success by Design",which details how to scout, prepare, and forecast for as well as to consistently kill mature bucks.

I have mentioned this before, but during the 12 years that we hunted our old, SW WI lease, we found 3 sheds. However, we were able to hunt and harvest the majority of the oldest bucks in the neighborhood, on that same land. During some years we even captured pictures of over 30 different bucks, with a large portion of the oldest bucks annually taking up residence from late October through December. Winter whitetail scouting for sheds on that parcel, in the first several years, left us discouraged and worried for each upcoming season. However, a dozen years taught us that the lack of quality shed finds, didn't have anything to do with our eventual level of herd management and hunting success. The same can be said for rubs, scrapes, deer beds, trails and tracks, but the accumulation of sign, or lack of it, can leave a hunter scratching their head regardless of the amount.

*Learning why a buck chose to make a rub in a particular location, is far more important than the fact that he was once there. During your Winter whitetail scouting trips, make sure that you are constantly trying to think like a wise old monarch. To learn more about stepping into the thoughts of a mature buck, try reading, "Predicting Mature Buck Tendencies".

"Shed today, gone tomorrow". What I mean by that is that in my experience, a location where you find a shed today, is more likely than not, where that buck will be during the majority of the hunting season. In fact, in many cases (outside of winter whitetail yarding behavior), I have experienced that mature bucks are more likely to be in their Summer habitats when they drop their sheds during the Winter, than in their Fall habitats.

A few years ago I had a local hunter come up to me while I was writing at a cafe, introduced himself, and then let me know that he had been following my Facebook posts and website for years. One of the first things that he said was something along the lines of, "We find the sheds of the deer you guys shoot, and we watch those bucks all Summer, too. The really cool thing? The land that he hunts is nearly 2 miles from ours. The area around his land, also happens to be within one of our favorite Summer whitetail scouting loops, when my family, friends and I drive the local roads to find mature bucks, while then waiting to see where they are killed later in the year. He finds the sheds and feeds the deer during the Summer, we attracted, held and shot those bucks during the Fall. I am happy to make that trade every season!

During the late 80s and early 90s, anything and everything about hunting a mature buck, was a pure mystery. The passion that was fueled by the unknown, eventually propelled me into a full time whitetail career. Even though the level of mystery has been reduced throughout the decades, the passion for the entire strategy of growing and hunting a herd that includes mature bucks, has captured my whitetail focus more than ever before. One of the primary reasons that I have such a continued passion for whitetails in general, is by constantly asking, "Why?", in particular when it comes to an old, wise buck.

Unfortunately, the majority of mature buck information currently in print or online, revolves around scientific studies and generalized beliefs. That's great for a portion of whitetail understanding, but there is no substitution for in-the-field scouting on a more personal level. And that personal level is the type of information that is most useful to every whitetail hunter across the country, when it comes to determining your own high level of success, for your herd, habitat and hunting opportunities.

When you find a shed, the first thing you should do is ask "Why?" And the same can be said for rubs, scrapes, deer trails and deer beds. Why was that sign here, right now? Does it make sense that the particular buck that created the sign, would be here during the Fall? Did I capture frequent trail cam pictures of that same buck during the majority of the hunting season, or more during the Summer? Where was that buck feeding during the afternoon, during the Summer and Fall (most of the time completely different locations)? Where did that buck travel from to access the land I hunt, during the Fall, and does that match up with where the shed was found? You may find that all the pieces fit together to form a neat little pattern of movement within 100 acres or less, but most of the time, the entire big picture will reveal that his Summer to Fall to Winter patterns covered a few miles, instead of a few hundred acres. However if you can't answer "Why", then it is time to spend more time studying trail cam photos, practicing Summer scouting activities, and hitting the Winter whitetail woods. As the years pass, I have experienced that a large portion of the mystery of mature buck behavior is there to be revealed, if you are open to seeking the answers of "Why", on a more personal level of understanding.

The greatest accumulation of whitetail sign that I have ever experienced, has been during the Winter months. But at the same time much of the habitat where that sign was located, has been some of the worst to actually hunt. During the late 90s I thought I had made an incredible discovery, when I stumbled upon a huge accumulation of sign within a stand of white cedars, along a creek. I immediately took a seat with my rifle, and waited for the herd to come back. I waited the next day too! It was then that I experienced the harsh realization that whitetails will sacrifice quality daytime bedding cover that features great browsing opportunities within a diversity of habitat, in favor of dense, browseless mono-culture habitats of a thermally protected cedar thickets. The deer didn't actually want to be within those cedars, but a recent extreme Winter storm forced them to stick around for a couple of days until conditions improved. During the improving conditions, I thought I had discovered a deer hunting gold mine, only to eventually realize that those deer weren't coming back until the next Winter storm.

Whether it's a storm, extreme cold, or drastically changing food sources, often Winter whitetail discoveries can create a pretty convincing lie, in particular when decreaasing cover options have herded deer in close proximity with one another. Often incredible Winter bedding areas, are completely devoid of deer for nearly the entire hunting season.

Big rubs are something I love to find, and most likely that you love to find as well! However, mature bucks make many random rubs throughout their rutting travels. Is the next giant rub that you find, offer a level of certainty that it is part of a larger picture of defined mature buck travel? There are 3 periods of rubbing activity that I have personally experienced, including: Early September, the early stages of the rut, and during the 2nd rut. The majority of the bucks that I shoot, leave their early September rubs somewhere else. As it pertains to my own hunting and whitetail management efforts, exactly a buck shreds a tree right after he sheds his velvet, does not contribute to my personal strategy. My favorite rubs to find, including shavings on the leaves.

Most leaf drop occurs from early to Late October within the North 1/2 of the Whitetail range. What does this mean for you? That when you find shavings on top of the leaves surrounding the base, you can be assured of the timing of that rub. If you find that the majority of the rubs on your land lack shavings, then you need to create some better Fall habitat and whitetail sanctuary conditions. Mature bucks will lay a large % of their rubs down, in particular during portions of the November rut. At the same time the majority of gun seasons fall somewhere in November. If you find that the majority of the rubs that you discover, include shavings on the leaves, then those bucks are telling you that the habitat you offer meets their November needs. November, is when deer herds are built, so it is critical that the number of post-leaf drop rubs on your land, is a very high % of the overall rubs that you find during your Winter whitetail scouting missions.

Is January, February or March the best months to practice your whitetail scouting efforts? Maybe, but only if you use your findings to map the Fall, and not the Winter. Once you ask yourself Why that shed dropped here and why those rubs, scrapes and beds are over there, it is time to try and ignore your findings, that do not relate to the Fall hunting season. That task can be pretty hard to do! Over the years it was fairly easy to do for me personally, because while I scout dozens of client parcels each Winter, I rarely have time to scout my own. So, I have been left to largely make treestand, travel corridor, bedding area and any other habitat improvement plan, based purely my Fall observations. That process has not only proven successful for decades, but it has also removed a lot of the clutter of sometimes misleading Winter scouting discoveries.

Again, are the Winter months the best months to scout? For me, no, because I have focused purely on where the whitetail herd, including the target mature bucks that I am after, are spending their Fall. Trail cams, in season scouting efforts and in-the-field hunting observations have revealed to me more than enough, to make educated sit decisions during the season.

Understanding the annual Whitetail Habitat Shift is critical in recognizing the patterns of deer movement throughout the entire year. The video below, helps describe the annual shift!

During some winters, I have found sheds on client parcels in 5-10 states. They are very cool to find and I don't blame hunters for putting on some incredible boot miles each shed season. However, it is important to ask Why, for every Winter discovery, as it relates to your hunting season efforts. For me personally I am too busy scouting for mature bucks, deer sign, whitetail stand locations, whitetail habitats and sheds, on other people's land each season, to take the time to scout my own. Maybe that has helped throughout the years? Regardless of when you scout -Summer, Fall, Winter or Spring-, by taking the time to sift through the discoveries to focus reveal Fall behavior patterns, I have experienced that you can create an outstanding opportunities to find antlers on the head, instead of on the ground. 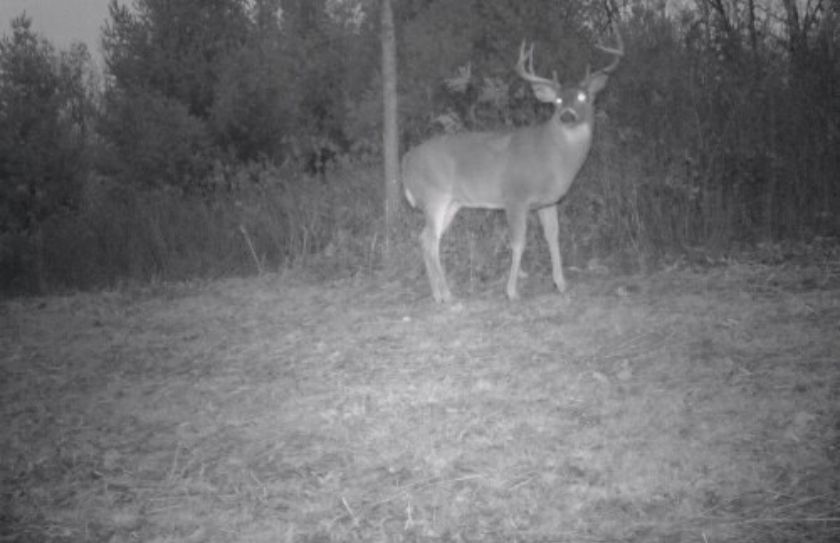 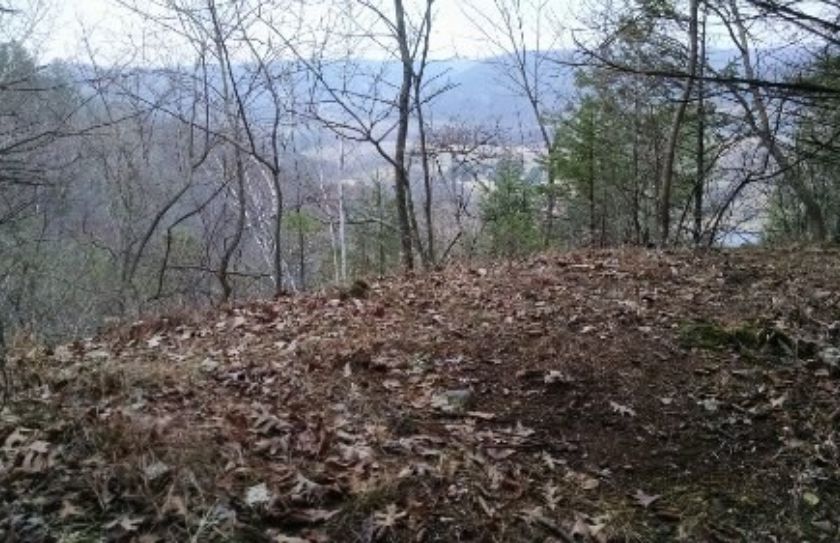 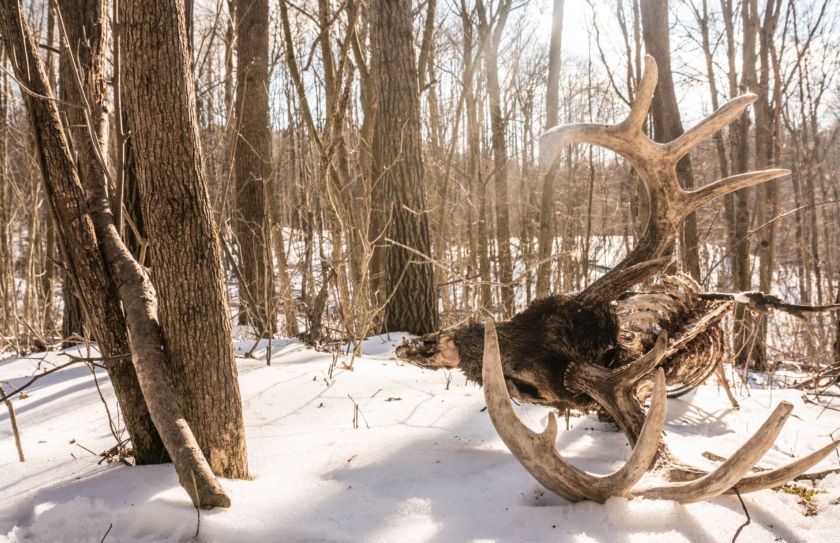